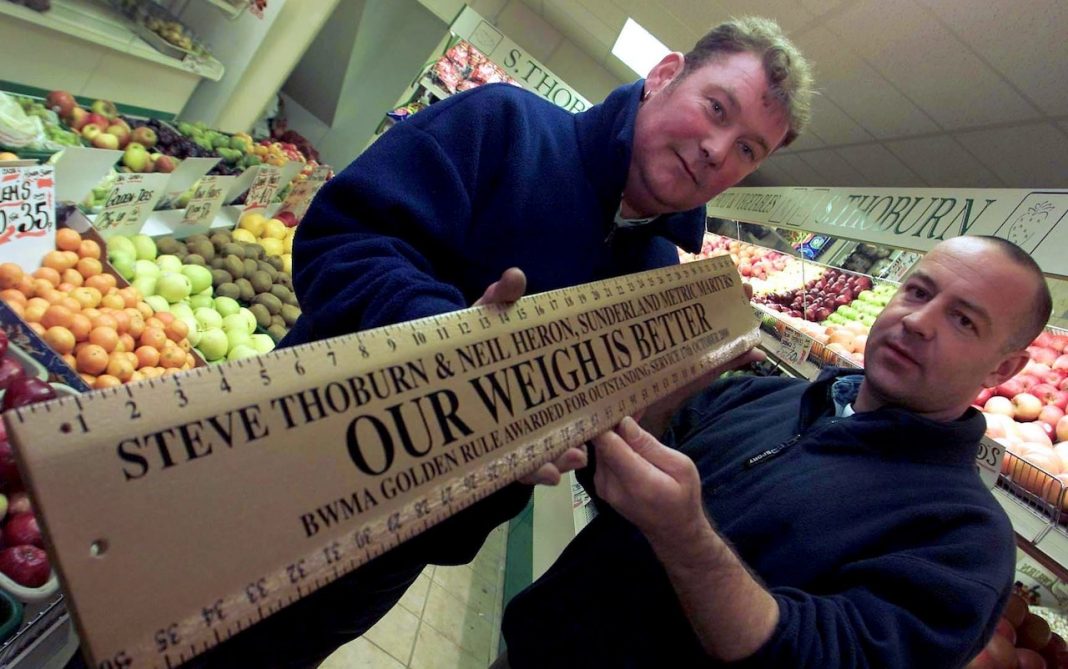 The struggle for Britain to keep the pound as the 20th century drew to a close was epic. “Keep the pound and keep control” was the European election campaign slogan used by Ukip the first time I was elected an MEP in 1999. As the 21st century dawned, a prolonged fight to hang on to our national currency ensued. And despite the best efforts of Tony Blair, big corporate businesses, various Trade Union leaders, the National Farmers Union and others, we secured a great victory. We won. We kept the pound. Had we lost, I believe that Brexit would never have happened.

Starting at about the same time in the late 1990s was a campaign to keep the other pound – the measurement (lb). The metric fanatics had been busy since the 1960s trying to impose kilograms upon Britain. These people hated the old customs and traditions of our country. They viewed them as backward, out of date and, frankly, embarrassing. They wanted to usher in a new future. (It’s interesting to note that the keenest of these metricators were also those who were most intent on Britain’s EU membership).

The left-of-centre education system was a crucial tool in that crusade, as only metric measurements were taught in schools and universities. The trouble for the metricators was that the old ways persisted. People still talked about gallons per mile when filling their cars; pounds in weight when buying fish and meat; and pounds and ounces at the grocer or the baker. It was impossible to re-programme those who had spent their entire lives using these terms.

Nonetheless, as a result of our own 1985 Weights and Measures Act and further European legislation, the concept of EU harmonisation kicked in on 1 January 2000, when it became obligatory for traders to weigh goods served in front of customers in both imperial and metric measurements.

Speaking as a former commodity trader, I was happy and conversant with both systems. In the City, we traded in dollars per tonne in London, and cents per pound in New York. But it was the elites that saw imperial measurements as backward. They were determined that they should be swept away.

Then in Sunderland (it always seems to be Sunderland!), something dramatic happened. Early in 2001, Steve Thoburn, a fruit and veg market trader, continued taking orders in imperial measurements and selling his wares without any metric equivalents, in breach of the EU directive. Extraordinarily, local trading standards officers challenged him and in April 2001 he was prosecuted at Sunderland Magistrates Court. The dispute stemmed from the sale of a bunch of bananas worth 34p. His imperial scales were confiscated and he was given a six-month conditional discharge. Despite huge public support, his conviction was not overturned on appeal in the High Court. He embarked on a three-year battle for the right to sell his fruit and veg as he saw fit.

And so began the Metric Martyrs campaign, which advocated for the freedom to choose which measurements are used by traders. Ukip MEPs paid for the original legal opinion. I went to visit Steve Thoburn in Sunderland and thought he was a very brave and principled man. Why on Earth should the language of Shakespeare be criminalised, I thought? What about consumer choice? In many ways, the Metric Martyrs’ campaign encapsulated everything that was wrong with Britain’s EU membership.

It turned out Steve Thoburn was not alone. Four other market traders who also believed that consumers should have a choice were convicted of breaching the same EU directive. Tragically, Steve Thoburn, a father of two, died aged 39 after a heart attack in 2004. The other Metric Martyrs fought their cases in the courts.

Now, at last, six years after the Brexit vote, common sense is to be applied. Boris Johnson is reportedly going to announce a consultation into how to further incorporate imperial measurements in Britain. We will even be able to have the Crown emblem on our pint glasses, 20 years after Ministers working in Tony Blair’s first administration imposed EU rules banning the symbol. I’m particularly pleased about this move, which has been presented by Downing Street as Johnson giving the country a Jubilee bonus.

Unlike the other fight to keep the pound sterling, however, the battle to restore the pound and ounce has two more important stages to complete. The first stage is that our education system should ensure that children are fully conversant in both systems. After all, America is still very strongly imperial, so it can hardly be described as outdated.

And perhaps more importantly, a terrible wrong needs to be righted. Not just for Steve Thoburn and his family, but for the other four Metric Martyrs. None of them should ever have been prosecuted. All of them deserve a formal pardon.

I’m very happy today to join the campaign calling for this. Frankly, clearing their names would be the very least that Johnson or indeed any other prime minister should be happy to oversee.