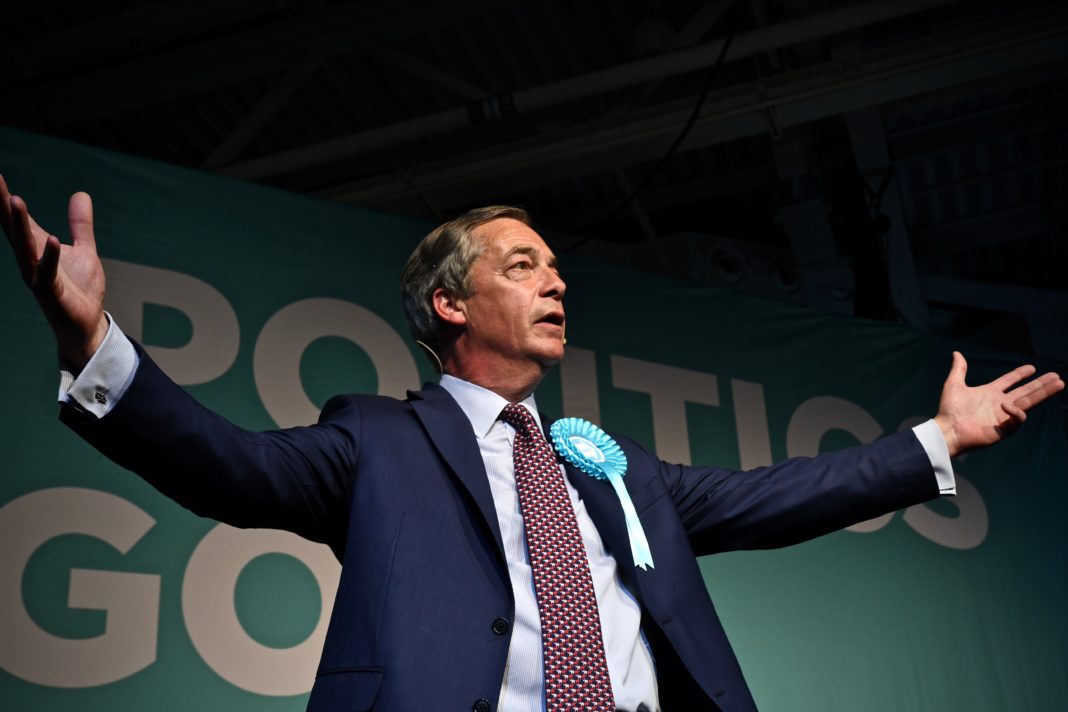 We are witnessing a dramatic, rapid and undeniable shift in the terrain of British politics – whether the establishment parties want to admit it or not. Take Peterborough as a case in point. In the 2017 general election, the Labour Party won 48 per cent of the vote there, just beating the Tories on 47. Between them they piled up a mighty 95 per cent of Peterborough votes – the embodiment of the old two-party system.

By the time of Thursday’s Peterborough by- election, however, everything had changed. The Labour Party clung on to the seat with 31 per cent, while the Tories finished a distant third with 21 per cent. This time the combined total for the two parties barely topped half of the total vote. And coming up between them, just 683 votes behind Labour on 29 per cent, was the Brexit Party.

Peterborough, by the way, was Number 201 on the Brexit Party’s list of winnable seats at Westminster. If we can get so close to winning there, then no Tory or Labour seat is safe any longer.

In the mere eight weeks of our existence, we have blown apart the old political certainties.  We swept to victory in the European elections, easily winning more votes than the Tory and Labour parties put together. Even more remarkable is the latest YouGov poll of general election voting intentions, which shows the Brexit Party on 26 per cent nationally – an extraordinary six per cent ahead of the rest. And this is only the start.

For the next few weeks, the country is going to be possessed by a full complement of Conservative Party leadership candidates, telling us that we will definitely leave the EU as promised on October 31. That date will loom larger in the public consciousness over the coming months.  If Brexit is betrayed yet again, and we do not leave on October 31, there will be no telling what extraordinary heights the Brexit Party might reach.

The meteoric rise of the Brexit Party poses a dilemma for millions of Tory voters.  In many parliamentary seats the real contest now is clearly between Labour and the Brexit Party, as it was in Peterborough on Thursday.

Of course, the Tory leadership candidates will all insist they can be trusted to deliver. But given that Mrs May told us 108 times that Brexit means Brexit and that we would be leaving on March 29, why would I believe a word any of them say? Especially as all of them, despite their earlier protestations, ultimately voted for Mrs May’s appalling Withdrawal Agreement – really a new EU treaty, penned by M Barnier.

While the establishment parties tear themselves apart over Brexit, what next for the Brexit Party? On Sunday June 30 we will hold our first national party conference – “The Big Vision” – at the NEC Birmingham.

There, we will lay out our strategy for fighting a general election and unveil our first 100 candidates. I admit that we still have quite a lot to do to get ready – we have already received more than 3,000 candidate applications, and are working to create a national network of activists from scratch. But we are up for the fight.

At the NEC Birmingham we will also unveil the direction of our policy development, especially focusing on the opportunities that ought to be available to Brexit Britain. Then we will start a consultation with our paying supporters – all 110,000-and-counting of them – and give them a vote on what happens next.

This is the new politics, with decision-making powers taken out of the hands of a few party delegates or self-serving National Executive Committees, and directly entrusted to our supporters. When we say that the Brexit Party is a movement for democracy, we mean it. And our direct democracy begins at home.

I launched the Brexit Party a mere eight weeks ago with the commitment to “Change Politics for Good”; to challenge the insular political class, replace their outdated two-party system, and push for fundamental democratic reform across our unrepresentative political system.

In that short time, others who talked about “change” but only offered more of the same stale ideas have already fallen off the political map. The Brexit Party, by contrast, is beginning to redraw that map. We are tapping into the appetite for real change among millions of people who believe that enough is enough and that Britain deserves better.

Eight weeks into the life of our new movement, what I see with this party is energy, enthusiasm and optimism, from our great candidates to our growing army of supporters. The success of the BP is the alchemy by which we are turning anger into hope.