Starmer must rein in Sadiq Khan before it’s too late 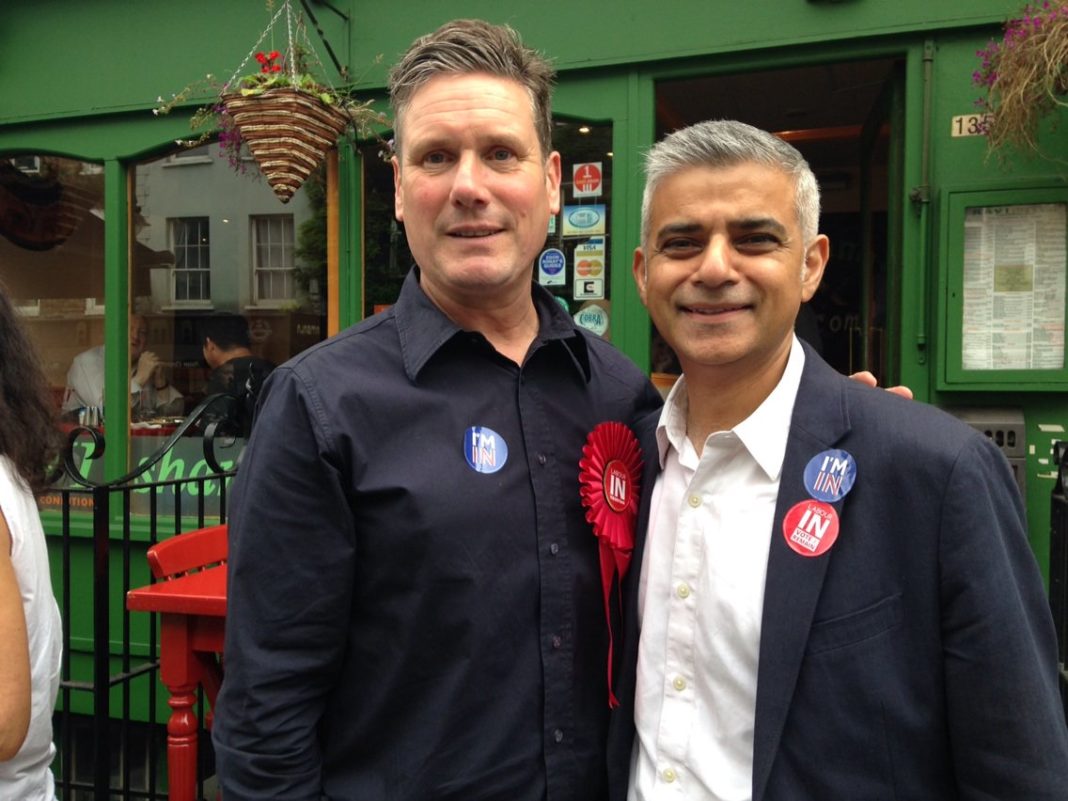 Starmer seems to understand that he must drop the Metropolitan woke act to win the next election. But the London mayor evidently doesn’t.

The blinkered excitement that surrounded last year’s Black Lives Matter marches at last appears to be fading. At the recent England versus Scotland rugby international many players, including Billy Vunipola, refused to ‘take the knee’. The Crystal Palace striker Wilfried Zaha has also dismissed this gesture as “degrading”. And now, at last, the Home Secretary Priti Patel has said she would never take the knee either. It has taken much longer than it should have done, but the truth is beginning to circulate widely: BLM isn’t just a loose group of well meaning social activists who enjoy a protest – it’s a political organisation which would like to see Western capitalism brought down.

Those of us who have tried to explain this since last summer can begin to breathe a sigh of relief. But there is one man who should now be worried: the Labour Party leader, Sir Keir Starmer.

Last June, Sir Keir ‘took the knee’ in his parliamentary office and then posted a picture of himself in the pose on his Twitter account. Jumping on this bandwagon was a huge error. Internal Labour Party research, backed up by Lord Ashcroft, shows that voters in so-called ‘Red Wall’ seats believe that the London-led Labour Party is completely out of touch with them. It doesn’t take a genius to work out why. Most people’s priorities relate to a good education for their children plus home and job security for themselves, so they don’t take particularly well to an MP genuflecting in support of a hardline left-wing group.

The Labour Party will only regain many of these Red Wall seats – and will only have a chance of winning the next general election – if it dumps the metropolitan woke act and reconnects with the vast majority of voters in this country. I think Sir Keir understands this, which is why, after years of deriding national flags (who can forget Emily Thornberry’s 2014 tweet from Rochester of a white van driver’s house draped in the cross of St George) Labour has suddenly decided that the flag is acceptable. All Islingtonians have been put on notice: patriotism is the name of the game from now on. This approach may work for Starmer, but it is clear that he still has a major battle to fight with one man in his party, Sadiq Khan, the Mayor of London.

The BLM protests were chaotic, to put it mildly. The Cenotaph was desecrated and Churchill’s statue in Parliament Square was daubed with graffiti, among other outrageous acts. In the confusion, the law-abiding majority was silenced, while those who peddled lies shouted loudest, informing us that our past was to be cleansed.

Into this nightmarish scene stepped Khan to announce he was setting up a Commission for Diversity in the Public Realm. This month, he unveiled the members of this sinister-sounding enterprise. Its aim is clear: to remove statues, change street names and alter the imagery of London so that it can reflect the ‘diverse’ city as it is now. Khan believes that it is for him, as a here-today-gone-tomorrow local politician, to eradicate London’s Victorian history if it comes to it.

The problem for Sir Keir – a London MP – is that some members of this commission will, I predict, cause him and the Labour Party huge embarrassment. The group appears to be made up of hard left anti-British activists who are not representative of proud Londoners. Take Toyin Agbetu. He is described as a social rights activist, but many would consider him a hard left extremist: in 2007 he heckled the Queen during a service at Westminster Abbey to commemorate the 200th anniversary of the abolition of the slave trade, and then threatened to punch a security guard when restrained. Does he know anything about the role played by the Royal Navy over decades in stamping out slavery? I am not convinced he does.

Another commission member, Aindrea Emelife, is an art historian. She does not appear to be any more objective than Agbetu. Indeed, she expressed delight at the removal of the Colston statue last year, saying this unlawful act gave her “a rush of adrenaline”. Will any statue in London be deemed acceptable by Ms Emelife? The only thing she has guaranteed to protect and defend is the importance to London of the LGBTQIA+ community.

Perhaps the worst of all, though, is Lynette Nabbosa, who describes herself as a “Business Lecturer with a background in financial inclusion”. She has said that white supremacy is a British phenomenon, writing “No matter where you find examples of white supremacy, all roads lead back to my country of birth [Britain].” I won’t even attempt to refute these ludicrous and dangerous statements. That Khan has put her in a position where she will have a say in determining what streets and statues in London are allowed to remain untouched is unspeakable.

London may be a different place to the rest of the country, but it is not that different. Put to one side questions of how Khan’s group was assembled or who determined that any of the commissioners was worthy of sitting on this panel, and just remember this: hundreds of thousands of pounds of taxpayers’ money will be spent trying to dismantle London’s history – against the wishes of the silent majority – by this cabal of unelected “social activists” appointed by a Labour mayor. Surely that won’t be popular.

Sir Keir Starmer must rein Khan in, and he must do so very quickly for two reasons. From his own point of view, if he doesn’t, a steady stream of toxic publicity will emanate from this commission which will swamp the Labour Party, further alienating the patriotic North. The wider point, though, is that the people who pay Khan’s wages never asked for this Orwellian monster to be created and they do not want it.

Will Starmer act in the public interest or is he happy to give Khan the chance to lose him the next election by an even bigger margin than Jeremy Corbyn achieved in 2019?

Share
Facebook
Twitter
Pinterest
WhatsApp
Previous article
Ministers have a golden opportunity to save our beleaguered coastal communities. They must seize it
Next article
NIGEL FARAGE: A Communist takeover of our schools that Britain must end at once