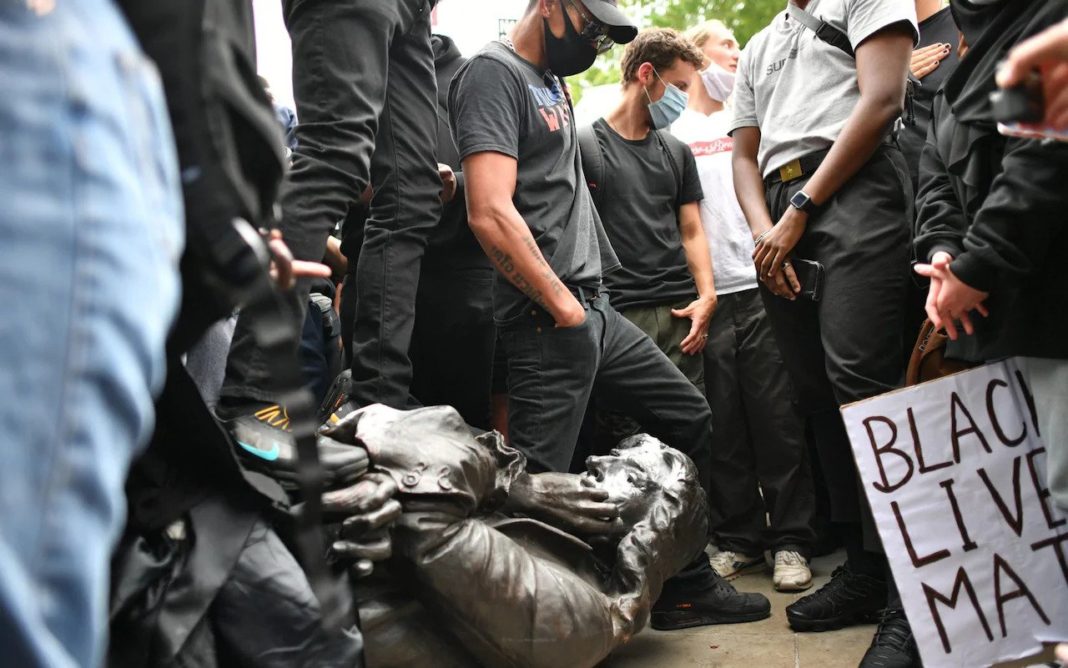 Unless the Prime Minister puts a stop to this policy of appeasing activists, there is real danger of a rapid deterioration in social order.

The appalling scenes of violence and disorder in London and Bristol at the weekend should not have surprised anybody. A few days earlier, the first of this series of Black Lives Matter gatherings had taken place and by early evening, it had escalated into an aggressive encounter between protesters and police outside the gates of Downing Street. Because of the way Wednesday’s incident was handled, the message to anarchists and vandals was clear.

In effect, the authorities said: “Nobody in this country has the moral courage to stand up to you, so please do as you wish.” The BBC and much of the mainstream media (with a few exceptions) may wish to portray these protests as “peaceful” but they have not – and will not – convince me or millions of others.

As far as I am concerned, the toppling of Edward Colston’s statue in Bristol on Sunday, amid hysterical screaming, marked the birth of the British Taliban. That same afternoon, for the second day running, Sir Winston Churchill’s statue was also defaced as agitators chanted: “Churchill is a racist”. Even at the Cenotaph, a monument to those who died for free speech and democracy, someone tried to set fire to the Union Flag.

While many of the middle-class university-educated types who attended these protests did so because they believe in a more equitable society, the truth is that they were being used by an extreme Left wing organisation which is heavily funded by those who want to overturn the norms of our society. No leading political figure has the courage to say this, for fear of being labelled “racist”, but this is the reality and only cowards will deny it. The Black Lives Matter movement has a full Marxist agenda of wealth redistribution and, crucially, a desire to defund the police service. Their proposal is to replace it with some form of community law enforcement.

In light of this, I would like to know more about the view of the Metropolitan Police Commissioner, Cressida Dick. She has said she understands the reasons why some of her officers took the knee last week yet, at the time of writing, more than 50 of her officers have been injured – some seriously. What on earth did Ms Dick think she was doing by expressing anything other than an entirely neutral position on this matter? With that said, her wishy-washy attitude does, I suppose, have one use. It confirms that if you appease the mob, they will come back time and time again.

In Bristol, the Avon and Somerset Police chief constable, Andy Marsh, has said he had no regrets in letting the mob bring down Colston’s statue and throw it in the harbour. He may feel justified in saying this, but what next? Should all statues commemorating historical figures who lived in the days of Empire be subjected to the same treatment? Perhaps Oliver Cromwell is next on the list because of his activities in Ireland in the 17th century?

I sympathise with the men and women of our police forces, but their bosses have completely failed us. Political leadership is in short supply, too. Matt Hancock and Boris Johnson are happy to parrot “Black Lives Matter” without attempting to explain that while the words themselves may be innocuous, the organisation is dangerous. In this, they are helped by the Opposition leader, Sir Keir Starmer, who did not utter a single word on Sunday as police officers were being hospitalised.

True, Johnson did put out a late tweet about the violence, but does he not realise that Conservative Middle England is absolutely appalled at what is going on?

There is a leadership vacuum and, alarmingly, things now look likely to get worse. The Home Secretary, Priti Patel, has voiced her outrage, yet there is no tangible sign of anybody getting a grip and tackling this increasing lawlessness. There is a huge difference between equality of opportunity, fair policing, and giving covert support to this violence.

Some may have hoped that in these troubled times, the Church might offer salvation. They hoped in vain. Archbishop Justin Welby has said merely that he understands why the protests are happening and why white supremacy must end. Again, he is an authority figure who does not – or will not – engage properly with what is going on. There is palpable public anger at the symbols of our nationhood being desecrated. Unless a leader puts a stop to this policy of appeasement, there is real danger of a rapid deterioration. I do not find it difficult to imagine public clashes between Black Lives Matter protesters and the supporters of Tommy Robinson, whose modus operandi I have condemned before. Such clashes would achieve nothing other than widening divisions, of course.

The tensions of recent days represent the biggest test yet for Boris Johnson’s 11-month premiership. Millions of his supporters are urging him to act. He must do so very quickly or he will fail his allies and split the country.