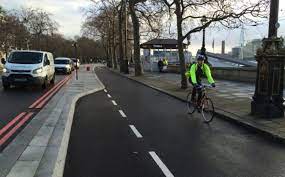 Low Traffic Neighbourhoods have become a disaster, inconveniencing the public at vast cost.

This year, councils across the country have been helping themselves to a fund worth hundreds of millions of pounds, created (I use the word advisedly) by Transport Secretary Grant Shapps to build cycle lanes, narrow roads, and turn streets into cul-de-sacs. Under the banner of “Low Traffic Neighbourhoods”, these schemes were introduced without warning as a coronavirus emergency measure and are meant to discourage short car journeys and encourage people to walk and cycle more. Instead they have become a disaster. They may allow the Government to virtue-signal and show off its eco-credentials, but they are causing untold misery to millions of people.

Indeed, there are so many problems with “Low Traffic Neighbourhoods” that I am beginning to think they represent perfectly the collective madness that seems to have much of Britain’s officialdom in its grip.

This country simply cannot afford to blow money on trendy “green” projects like this. The OBR has forecast that the economy will contract by 11.3 per cent this year while borrowing will reach £394 billion – 19 per cent of GDP, the highest level in peacetime history. I don’t think anybody has really begun to digest what this will mean for Britain’s economic future.

The volume of cyclists using many of the new cycle lanes is also so low that they cannot be justified. In far too many cases, all the lanes and road closures have succeeded in doing is causing traffic jams, therefore increasing pollution and triggering huge frustration in a population that has had about as much as it can take for one year. Do the councils responsible realise the sheer hatred that their rules and regulations inspire from taxpayers?

Many of the schemes are not just environmentally counterproductive, they are also downright dangerous, preventing ambulances and fire engines from reaching emergencies quickly. This seems not to have occurred to the “experts” on whom Mr Shapps allegedly relied when he gave the green light to this ridiculous plan.

All of this makes me want to weep, and I know I am not alone. Last month, Labour MP Rupa Huq wrote on these pages that in the past she has been lobbied by the public on bombing in Syria and on Brexit, but “nothing has inflamed like this”. Huq even said she thought these schemes were designed specifically to make people hate Labour councils. She is wrong. Tory councils are at it as well and people now hate them just as much.

True, some schemes, like the one in Kensington High Street, are being reversed (though only after £320,000 was spent on it) but mostly they are going ahead regardless of who is in charge. Residents are protesting, but councils are not backing down.

It is happening across the country. People in Cricklewood, north London, had to start a campaign for a pensioner whose disabled parking bay was moved to make way for a road block. Earlier this year, scores of demonstrators gathered outside Hove Town Hall in anger at new cycle lanes and road layout changes in Brighton. And in Chester more than 2,000 people have joined a group protesting against new bus and cycle lanes which are also part of this new craze to re-allocate road space for cyclists and pedestrians.

There is no sign of this green revolution letting up. Frighteningly, the Department for Transport has earmarked £2 billion to spend on cycle lanes across the country over the next five years. It makes no sense. Researchers from the Economics and Human Biology journal have estimated that every £5,000 invested in building new cycle lanes results in just one extra commuter taking their bike to work. So far, the Government has apparently spent £6,153 of public money for each new cyclist in inner London and £4,174 elsewhere.

What began as a green initiative many years ago then became a red initiative when it was endorsed by the Labour Party. Now it has turned blue having been adopted with zeal by the Conservatives.

I intend to try to do something about it. My new party, the Reform Party, will stand candidates against any and every local councillor who backs these new cycle lanes and road closures in next year’s local elections.

If measures to improve the environment really are necessary, they can only be introduced sensibly and with proper consultation, not sneaked through cynically under the guise of the pandemic. Councillors need to realise that they will be held to account for what they are doing. This has become a very important issue for the Reform Party.