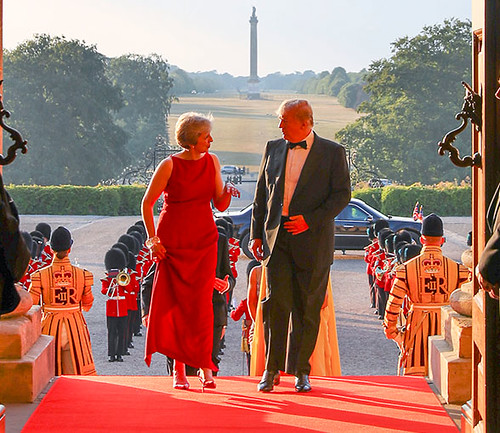 “The US president might actually try standing up for Britain, unlike Theresa May“

I don’t always agree with Boris Johnson, especially as his kind of Brexit would leave Britain with higher levels of immigration. But on the issues of trade and the UK’s global future, he is clearly becoming justifiably exasperated with the actions of the Treasury and the weak leadership of Theresa May.

When he said at a private dinner this week that Donald Trump would make a better job of our exit negotiations, I think he was on the money.

The idea of general elections, and democracy in a broader sense, is that the leader who wins does so partly on the strength of the promises they have made during the campaign. Then, at the end of their term in office, voters judge them against their record.

Sadly, in recent decades on both sides of the Atlantic, the two main parties (which incidentally have few individual differences between them) have abandoned promises. Instead, they seem to have set out half-hearted intentions that rarely last beyond election time.

Whichever of them wins then does their very best to forget about whatever pledges they made. David Cameron’s “promise” in 2010 to cap immigration at tens of thousands each year is a prime example.

Trump is different. Whether acting in defence of his steel industry, moving the US Embassy to Jerusalem or increasing spending on the military, he is determined to be judged by his word. Indeed, he recently joked that he is the only US President who has kept more promises than he made.

In her Lancaster House speech of January 2017 and in her General Election manifesto a few months later, Theresa May made it clear that Britain is leaving the European Union, the single market and the customs union. Yet since then she has spent more of her time conceding ground to the EU’s Brexit chief, Michel Barnier, than she has taking the country forward. She is endlessly kicking the can down the road. Frankly, her performance to date has been abysmal.

Now she tells us that perhaps by 2022 Britain will be genuinely free of the European Union, though she still hopes to opt back into a number of its programmes. On this basis, who can seriously argue that Trump wouldn’t be a much better negotiator than May? He stands by his pledges, unlike our career politician Prime Minister.

Anyone who has worked in the private sector will know that in any negotiation the other side needs to know that you are willing to walk away if necessary. Indeed, in the last weeks of the referendum campaign, I worked with leading economists to coin the phrase “No deal is better than a bad deal”.

Logically, the EU should want a free trade deal with Britain, but Mr Barnier is far more worried about the surging vote of the populist parties across the Continent. The interests of European exporters are, for now, secondary.

Trump never hesitates about walking away from a deal. In fact I think he rather enjoys doing so. It didn’t matter to him that the Democrats, the liberal media and Wall Street hated the US’s withdrawal from the Trans-Pacific Partnership. He quit it because in his view it was a bad deal and he said during his election campaign that he would do this. He walked!

Mrs May is surrounded by civil servants who have no comparable world experience. When she first said “No deal is better than a bad deal” I cheered loudly. It is now clear that she never meant it and her weakness threatens her own position.

In agreeing to the backstop position in Northern Ireland in the pre-Christmas crisis talks, she has almost placed herself into checkmate. With the crucial House of Commons votes on Tuesday looming, and with them her very political survival, a different approach is needed immediately.

Leadership is a quality that can show itself in very many different ways. With Donald Trump there is, to quote Boris Johnson, often “all sorts of chaos”. But Trump himself said in a recent interview that he would have a different “attitude” towards Brussels if he was in charge. He went on to say he would have taken a tougher stand on getting out. Short-term tactics are always very hard to see, often unpredictable, but his strategic long-term goal of getting a better deal for the USA is all too clear.

There are 17.4 million of us who are now desperate to see some real leadership from Theresa May. She needs to ignore those around her and tell the unelected bureaucrat Barnier that he is not acting in good faith. She must make it clear that Britain will no longer be talked down to and tell him in no uncertain terms that his recent attempt to divide the United Kingdom is despicable. That is what The Donald would do, and my guess is he’d do it rather better than Mrs May.

Share
Facebook
Twitter
Pinterest
WhatsApp
Previous articleFacebook made Brexit possible – but now it is discriminating against Right-wing news sites
Next articleThe will of the people deserves respect, not sneers, from Sir Alan Duncan and the liberal elite